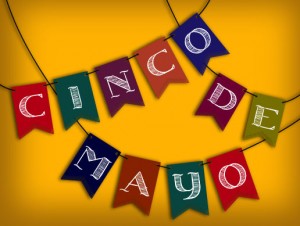 We celebrate Cinco de Mayo with gusto down here in San Antonio, Texas.

If you’re not familiar with the background of Cinco de Mayo, here’s a quick history lesson.

In 1862 at the Battle of Puebla, the Mexican army was outnumbered two-to-one by invading French troops. But that day – May 5 – the smaller Mexican army defeated the French and sent them packing.

Today, May 5 commemorates that important victory and honors the country’s heritage and pride.

Though the win at the Battle of Puebla wasn’t the end of Mexico’s fight against the French, it was a milestone in that direction. That victory bolstered Mexican confidence in the conflict. It encouraged and motivated the troops.

What does all that have to do with business blogging? Let me explain.

Sometimes business blogging seems like an unending uphill battle. We business bloggers need small victories like the one on that first Cinco de Mayo – a boost of energy to propel us forward.

The battle on Cinco de Mayo reveals a few ways we can stay encouraged while we’re writing. Let’s take a look.

So your post was shared a couple of times on social media. Big deal.

So you had a single inquiry from a customer who mentioned your blog. Big deal.

Exactly! It is a big deal.

Mexican troops didn’t scoff at their hard-earned victory at the Battle of Puebla, and they never forgot that unlikely win. That’s why we still celebrate it more than 150 years later.

So don’t dismiss your small accomplishments. Those are steps forward. When you recognize how challenging writing is, you appreciate each step you take in the right direction.

2. Use the momentum
Looking at numbers alone, Mexican troops weren’t supposed to win the battle that day. The French had double the forces. But Mexico’s victory encouraged the troops to accept the next challenge.

Starting a blog, you may feel like the odds are stacked against you. But you can use small victories to push you forward. Each success builds confidence. Don’t waste it.

No matter how small the victory is, use the momentum to take the next step.

3. Remember who you are
On Cinco de Mayo, Mexicans fought to keep the French from invading their country. When you first start blogging, you’ll also have to prevent an invasion. You’ll have to prevent other writers’ voices from penetrating and overpowering your own.

Readers want to hear from you – your personality, your insight, your distinct voice.

That’s the point of having a blog – to demonstrate to your readers why you’re the best. It’s your opportunity to show them why they should buy from you, not your competition.

Even if you’re an inexperienced blogger, don’t let doubt infiltrate your writing. Let your voice, your confidence and your authority clobber the competition, so your blog won’t sound like every other blog in your industry.

4. Never give up
A year after the Battle of Puebla, the French defeated Mexican forces and set up its own ruler. But that wasn’t the end of the story. Only a few years after the French ruler took over, Mexico ultimately conquered and expelled French forces.

In your blogging journey, you’ll also have ups and downs. You may write a lousy post. You might get busy and forget to blog for a while. You might feel like you’ve run out of things to say.

Don’t let these valleys discourage you. If Mexico gave up when France took power, we wouldn’t be celebrating Cinco de Mayo today. If you gave up every time you suffered a setback, you wouldn’t be in business today!

So keep marching forward through the writing trenches. Persevere, and you’re guaranteed to win another battle.

Your goal as a business blogger may look different from Mexico’s power struggle back in the 1800s, but the theme is the same.

Mexico wanted to keep its country alive and thriving under Mexican leadership. Small successes and milestones, such as the Battle of Puebla, gave them confidence to endure the challenges ahead. And to this day, we celebrate that success on Cinco de Mayo.

Similar to Mexico’s goal, you want to keep your business alive and thriving under your leadership. Small achievements like one post on your blog and a few social media shares can give you confidence and boost your momentum to keep writing.

How do you celebrate your writing successes?